18-12-2022 – An outlandish display of euphoria. Emotions rose high in the Asian weather, and the splendid Qatari ambiance. The excitement. The nervousness. A game of 90 minutes, split into two halves of 45 minutes each. This particular one has wiggled out of its standard definition, and it has taken on sensational attributes. This FIFA world cup final has defied imagination. It has exceeded expectations. Crackling. Sparkling. Dazzling. Nerve-racking display of soaring footballing competence. It will take off into its own life, becoming unusually lively and perhaps even delighted by its own whim. THE FIFA WORLD CUP FINAL!!!

In pubs, classrooms, and offices, people will talk forever about that night- that stellar night in Lusail, Qatar.  People will talk about how Messi- in all magnificence and distinction propelled Argentina to their 3rd world cup triumph. Folks will laud Kylian “the bold” Mbappe for how he changed the contest so that you had to commend the loser as well. And children will forever talk about the final that produced 6 goals- more than any final in history. Argentines will praise Martinez, the hero, who stood tall in goal, keeping goals out in service to the Argentines’ grand conquest.  Men will talk about Scaloni, people will praise Deschamps, and people will say ‘truly, this is a contest worth the hype’.

Among the technically savvy fans, there would be arguments about tactics and nifty managerial decisions. They would talk of Scaloni’s technical brilliance starting Angel Di Maria, who constantly created havoc on the left side of the french defense. He caused a penalty, which Messi converted while he himself got on the scoresheet minutes later. Or perhaps they will discuss the substitutes made by France in the 41st minute, which included the tremendous energy of 24-year-old Randal Kolo Muani and 25-year-old Marcus Thuram. The game included a sliver of justice, as Argentina’s Gonzalo Montiel, whose play of the ball with his arm in the 118th minute led to a penalty and a goal from Mbappé that tied the score and delayed a victory 10 minutes after Messi had scored and appeared to have just gotten one, ended up securing that victory with the final penalty kick.

“Montiel… Argentina, champions of the world. Again. At last. And the nation will tango all night long. 36 years ago since Maradona and Mexico, here finally is a nation’s new throng of immortals. Scaloni will be fated, Messi will be sainted” – Peter Drury.

This is not just about Messi. This is about every believer, every fan, every supporter, every fan-boy, and also, the fan girl who dreamt of this day.  The sweat of football gladiators, who wear jerseys instead of armor, and kick balls instead of drawing swords.

All eyes will now turn to the United States, Canada, and Mexico, the hosts of the 2026 world cup. A different ambiance, another culture, same sport. Pressure will now mount upon these countries to replicate Qatar’s achievements. We will talk about this in 2026. Meanwhile, Argentina, the WORLD CHAMPIONS will savor the next 4 years. These events will have a huge place in their history.
More footballing action will continue around the world. Don’t miss any bit of it. Pay your TV Subscription, buy electricity units now with VTpass, and stay connected. 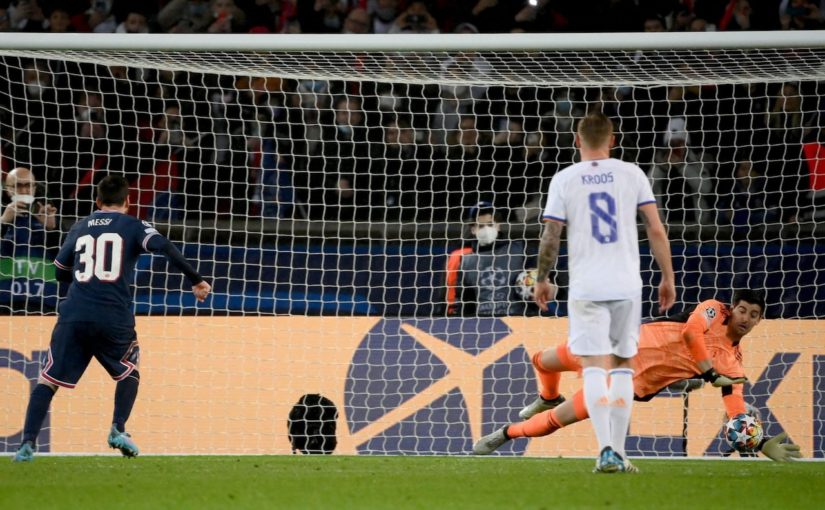 The UEFA Champions League Round of 16 ties went underway yesterday as Man City went head to head with Sporting, and PSG welcomed Real Madrid to Paris. What a night! The Champions League is back after a 3-month break. And it was like it never left.

When the round of 16 draws were made, I said City couldn’t have asked for an easier tie. I was proven right yesterday. City, in blistering form right now, went 4-0 up in the first half. Sporting, the home side, were outmatched and outclassed in every department. Riyad Mahrez opened the scoring in the 7th minute. VAR awarding the goal after a review. Bernardo Silva scored either side of a Phil Foden strike. By the time Raheem Sterling scored in the 58th minute, the entire tie was done and dusted. City sent a message to the rest of Europe. This was no beating, it was a destruction. It was clear. It was loud. They are coming. And they are taking no prisoners.

It was the Mbappe show. Paired against Real Madrid, after being initially paired against United, this tie was written in the stars. So many sub texts. Firstly, Angel Di Maria was facing Madrid again. Secondly, Real’s former captain, Sergio Ramos was coming home. Though sadly, he missed out to injury. Thirdly, Messi was facing Madrid. And though it was the first he wasn’t in Barcelona colours against them, the plot was written for him to be their nemesis once again. Lastly, Mbappe, possibly transferring to Madrid, had an opportunity to give them a first-hand experience of what he brought to the table. While all the other subtexts underwhelmed, with Messi even missing a second half penalty won by Mbappe, it was the young star who shone the brightest. And so it was that his brilliant, solo 94th minute goal finally settled the first leg tie. PSG 1, Madrid 0.

United took on Brighton on Tuesday night. No, it wasn’t a Champion’s League match. The match had been rescheduled from December following a Covid19 outbreak in the United camp. United are a side in distress, even with Ralf Rangnick covering till end of season. By the end of the first half, they didn’t seem like doing better than the draws they had gotten from their last 3 games. Until Ronaldo did his thing in the second half. Skipping past 3 Brighton players, he pummelled home from the edge of the area to score his first goal of 2022. His compatriot, Bruno Fernandes made it 2 seconds to the end of the match. And with that, United go into the Top four again, although they will face stiff opposition from clubs like Arsenal who have 3 games in hand.

The Champions League continues. and to get in on all the action, just make your Cable TV payments, pay electricity bills, buy airtime and data easily with VTpass. It’s as easy as click, pay and go to experience a world of endless entertainment.

If you’re a football enthusiast, then you will have no doubt been caught up in what is definitely the biggest move of the season as Messi transfers to PSG. Arguably, it is even the biggest move of this generation. Every club secretly wishes they were PSG right now. Imagine it. Having Lionel Messi play for your club, run at defences, play defence-splitting passes, ETC.

The news of Messi’s move is one that has rippled across the footballing world. Certainly, PSG this season will be a force no team will want to go up against, considering the fact that they were already a fearsome team before the 6-time Ballon d’or winner joined them.

There are those who believe that he would flop at PSG. In the same vein, others think that the PSG team would lose balance because they have too many attack-minded players. On the other hand, others say nothing can stand in the way of a football god.

Whichever side you stand on, one thing is for certain. We all cannot wait to see Messi hit the field in PSG strips as the jury is out, and this is where VTpass comes in. To stream football matches online, you definitely need data. To watch via DSTV, GOTV or Startimes, you need an active tv subscription. In addition, you need to pay your electricity bills.

As at now, Messi is officially a PSG player. However, due to the fact that he has not had a preseason, he will likely be needing 2-3 weeks to get back into shape. We most probably will see him in September.

In conclusion, one thing is for sure. All eyes will be on PSG this season.