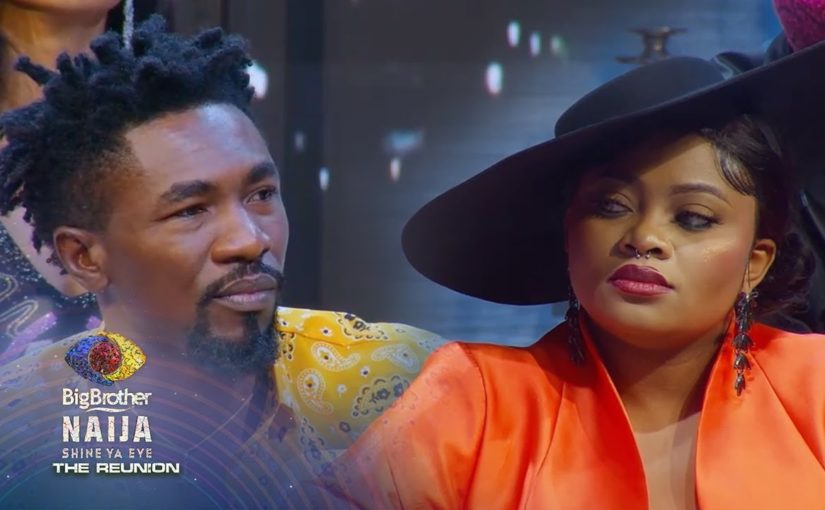 There was more drama in the episode 11 of the BBnaija Shine Ya Eye reunion show as the focus was on the Tega and Boma situationship. Whoosh. What a night it was. What a show it has been. The episode 11 of the show definitely came with a lot of heat. This was definitely one of the most controversial “ships” in and out of the house.

Before we got here though, it’s worth giving a mention to the “Crossgel” shippers. After episode 9 had aired, and Angel and Cross had both shed light on the “ship” situation, with Angel, more or less saying she felt she was more invested in the friendship that Cross, to the point of asking him to say all the things he had done for her. Omo, crazy. She did get bashed afterwards but I think what we say was a lady who cared about someone and wasn’t getting the same energy in return. Sad, really. Truly.

Consequently, Cross did try to defend himself though. He did say that he was at the moment, scared of relationships. It seems however that Angel is just forming hard girl. She seems to like, really like Cross. On the other hand, why does everyone say “we have a really good friendship.” That is to say, all of them are “just friends” now. No wahala. However, Cross and Angel both said they no longer wanted the friendship. Shucks. Another “ship” sunken?

Subsequently, on day 10, we had the messy triangle of Saskay, Jaypaul and Cross as the highlight of the show. Fresh out of the game, JayPaul launched a heartfelt campaign in support of Saskay. Sadly, when her time on the show ended, she made an infamous comment in the lines of not knowing who he was.

JayPaul also cited instances where he repeatedly made moves to maintain a healthy friendship with her but she was hellbent on denying him “more times than Judas denied Jesus Christ.” Lol. Judas don dey suffer for wetin poor guy no do o. Saskay in response accused him of being untruthful and having high expectations from a relationship that they never labelled. Tor. Crazy things are happening.

Likewise Cross, when he had the floor to address his grouse, narrated how a midnight visit to Saskay that she initiated was capitalised on by her fans and how they (fans) sparked rumours of them sharing sexual relations. He said Saskay mmust have leaked it for attention.

The Tega and Boma Situationship

In the episode 11, Tega and Boma finally got a chance to shed some light on their situationship. This came after an hot exchange between Maria and Beatrice over, in my opinion, nonsense. People really need to learn how to fight, though. Maria saw that Beatrice was unprepared and used that to her advantage. On the other hand, people online are saying that the only thing Beatrice said that made sense was the fact that Maria was senseless. Ouch!

Back to Boma and Tega though, Boma claimed that Tega had admitted to him, while in the house, that she was already separated from her ex-Husband. “In my head, I was dealing with a single woman,” He said. Not sure we’re having that as no clip of that exists.

For Tega, she said it was all a strategy. She had already agreed with her ex-husband, and then had to change strategy due to meeting JayPaul in the house. The whole story leaves more questions than answers. Holes in the story I guess. Why did you have your wedding ring on when you had a strategy to go into the house “unmarried”? Why did you and your ex-husband “make up” after the show? How come you didn’t say this sooner when the bashing started online? Anyways, they both admitted that they wish they opted for a less volatile strategy in the house.

On a side note, Boma did say people are jealous of him, and that 98% of married men in Nigeria have girlfriends on the side. Omooooor. Na to find me and who dey the remaining 2% ooo.

This is where we come in. Pay your TV Subscription, buy electricity units now with VTpass so you do not miss out on any of the BBNaija ShineYaEye Reunion drama as it unfolds.