On Tuesday 29th October, and Wednesday 21st October, the first leg of the 2020/2021 UEFA Champions League season playoff. We witnessed the return of Europe’s most thrilling football competition and the art of top soccer athletes.

The group stages of the tournament began with surprises and might just end with some more. In this article, we go over some of the unexpected match results from the UEFA champions league 2020/21 opener and matches to watch out for in the group stage:

Perhaps the only surprise from this encounter was the fact that PSG could still lose to Manchester United after their performance last season. The men from Paris made it to the finals last season but fell behind to Bayern Munich in a 1-0 contest.

Two seasons ago, Manchester United beat PSG 1-3 at the Parc des Princes stadium; everyone thought the Parisians would make a statement in this match with a win. But they fell behind 2 goals to 1 to the Reds.

Ok, not much surprise, but here is a match where a 300 million Euro Chelsea squad faces a firepower Sevilla and it ended 0-0. Fans were left a bit disappointed and so are we.

Real lost 0-1 to newly-promoted Cadiz last week in La Liga Santander; so it came more like a shock when Shakhtar put them 2-3 to the sword again at home.

Fans all over social media brought Real Madrid’s manager Zinedine Zidane under fire. But we feel the manager can only do much. With these results, Real Madrid needs a total squad rethink.

Pretty much every other game produced expected or near results, especially Bayern Munich who pounded Athletico Madrid 4-0 as a warning of their intent to retain the European Champions crown.

Now, let’s see the top group matches that you can’t afford to miss:

To catch all these actions live on your television, subscribe your GOtv or DStv with VTpass, either on the web or mobile app. We’ve got you covered!

The #EndSARS campaign which surged from the beginning of October was a call for police brutality and alleged criminal offenses of the Special Anti-Robbery Squad within the country to end.

While speculators wondered if the campaign would come to an end, following the Inspector General of police’s disbandment of SARS on Sunday, 11th, 2020; many protesters changed course, calling for the IG’s proposition of forming a new anti-robbery unit to be put to the sword.

To go by the name Special Weapon and Tactics (SWAT) team, the new anti-robbery police unit is meant to replace the now-defunct SARS. They would be tasked with carrying out the duties previously assigned to SARS.

The IG of police in a statement chipped in that members of SWAT would undergo a psychological and medical examination before admission into the force. He stressed that the unit would be held accountable for abuse of authority or violation of human rights. According to him, the unit would begin training from Monday, 19th October 2020.

But Nigerians took to Twitter just hours after the announcement, calling for the disbandment of SWAT, with the hashtag #EndSWAT trending immediately. According to them, SWAT is just a rebrand of SARS and is not the police reform they request for from the government.

Some of the reasons put forward by protesters for the #EndSWAT campaign include;

In answer to that, the police have listed the following criteria as the qualification for admitting members into the SWAT team:

Talks are still been held as to the promised police reforms while protesters continue to make their voices heard.

Stay up to date with happenings and news around you. Top-up airtime or data and subscribe your GOtv, DStv, or Startimes on VTpass. Download the mobile app here. 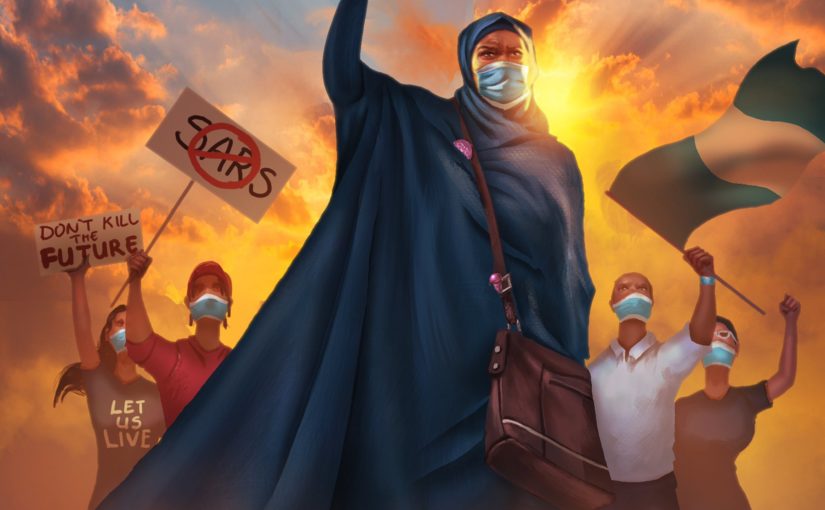 The latest hashtag trending all over Nigerian social media is the #EndSARS hashtag which has geared over 3 million tweets, excluding related hashtags such as #EnsSARS #SARSMUSTEND, and #SarsMustGo.

Aside from social media, #EndSARS has been physically protested – most notably, in Lagos and Abuja. People stormed the streets since Tuesday, 6th November 2020, protesting and calling for the disbandment of the Special Anti-Robbery Squad (SARS).

Nigerians overseas, especially those in Europe and North America, equally joined the campaign. While certain Nigerian celebrities voiced their opinions through videos and social media live transmits, non-Nigerian celebrities such as Trey Song, Cardi B, and Big Sean gave online activists a boost by their reactions to the campaign. Most notably, the British High Commissioner to Nigeria, Catriona Laing made a tweet on October 11th, 2020, supporting the Nigerian Police decision to ban SARS.

So why all the noise? You may ask. What is #EndSARS all about and why is the movement making headlines in Nigeria?

#EndSARS first began as a social media wake-up call started by Segun Awosanya in 2017 against the alleged brutality of the police unit. The campaign died down in the middle of 2018 as not a lot of people paid attention to activists call for the scrapping of the force.

On Saturday 3 October 2020, a video trended on social media showing a SARS police officer shoot a young Nigerian in front of Wetland Hotel, Delta State. The video prompted a public outcry on social media against the brutality.

Nationwide protests started on October 8th; a face-off of peaceful protesters and the Nigerian Police who tried to disperse the crowd through the use of teargas and water sprays. Concurrently, protests broke out in London, Canada, and the United States, calling for the Nigerian government to put an end to the police unit.

Accusations Made Against SARS

The Special Anti-Robbery Squad officers have been accused of illegally arresting Nigerians, especially youths, and extorting money or other valuables from them. SARS has equally been accused of mounting illegal roadblocks, searching without a warrant, rape, treating suspects brutally, and killing innocent Nigerians

In 2016, an Amnesty International report surfaced, accusing SARS of human abuse, cruelty, torture, and degrading treatment of detainees – such as severe beating, hanging, and shooting detainees in the leg.

Given the uproar, the Deputy Governor of Lagos, Femi Hamzat, addressed protesters on October 9, 2020, stressing that the police have no right to arrest or extort citizens of their personal effects without proper investigations and reason. He however alluded protesters to remain peaceful in their protest.

That same day, Lagos State House of Assembly held an emergency meeting to address the petition signed and submitted to the National Assembly by 10, 195 protesters. Some of the issues discussed by the House was the necessity to dissolve the Special Anti-Robbery Squad and set up a new unit in it’s place with a clear code of conduct and sanctions for illegalities.

Yesterday, been Sunday, 11th of October, 2020, the Inspector-General of Police, Mohammed Adamu, announced the dissolution of SARS. While some Nigerians took the announcement as a victory, many others called for the permanent elimination of the unit from existence, stressing that the government has banned SARS three times before now without substance.

Where does VTpass stand?

It’s a sad moment for everyone witnessing these events happening around the country. On the other hand, however, the people’s voice ought to be heard as it is constitutionally structured to be.

As a brand, it is our responsibility to look beyond business when supporting matters that most concern our customers. On that note, VTpass stands with Nigerians in the fight for justice against illegal police oppression, the abuse of power, and disregard of human rights. #ENDSARS.