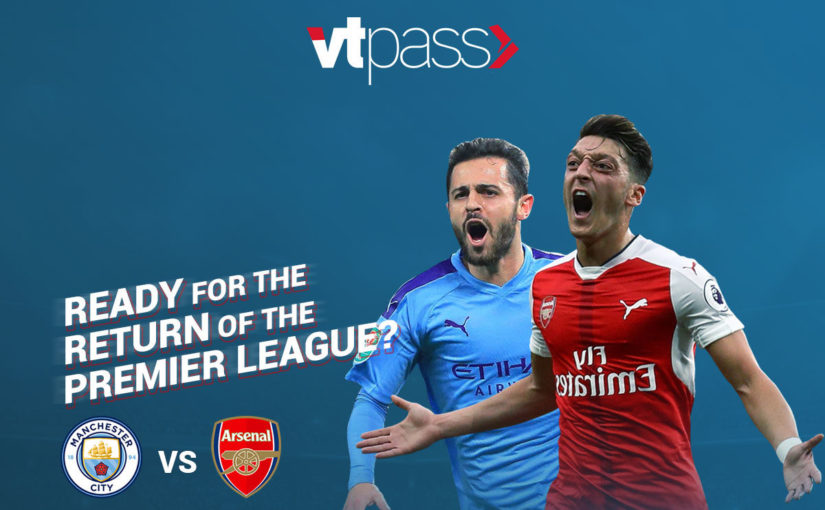 Fans of the Barclay’s Premier League are in for a treat tonight as the league official resumes; after 100 days hiatus due to the coronavirus pandemic.

The 92 games left to play would be packed into 40 days which would see the current season end by 26 July. Aston Villa v Sheffield United will kick off the English top-flight’s return; however, it’s the match between Manchester City and Arsenal tonight that got fans in a frenzy.

Here are a few things you need as the action returns:

As with Bundesliga and La Liga, all matches would be played behind closed doors. Not more than 300 people (staff, players, tech crew, etc.) would be allowed into stadiums. However, teams are setting virtual fans in place to ensure TV viewing isn’t boring at all.

To remember all those who died during the pandemic, one-minute silence would be observed before the starting of each game.

No Players’ names on shirts for a while

For the first 12 matches after resumption, players’ names on their shirts would be replaced with ‘Black Lives Matter‘ to commemorate with the death of George Floyd and the campaign against racism.

Liverpool eyes the trophy after 30 years

The Reds sits 25 points clear off second-place Manchester City and are 3 wins away from been crowned EPL Champions 2019/2020 season. Liverpool would most definitely be full of action as they campaign to clinch the trophy for the first time since 1990.

All eyes would be fixed on Manchester United and Chelsea as each battle for a place in the top four. Ahead of both is Leicester City and Manchester City and below them, just 2 points under United is the formidable Wolves.

Social distancing and other hygiene

Players would have to maintain social-distancing during goal celebrations. They are not to spit, shake hands, or come near referees. Coaching staff on the sidelines are equally under instruction not to come within two meters of the fourth official.

Catch all the actions!

Subscribe your DStv on VTpass to catch all the actions live and in HD. You don’t want to be told. Now once again, we can all tune in every weekend to watch goals and delicious passes. Click to renew your DStv subscription now! We’ll see you on the football side of life.